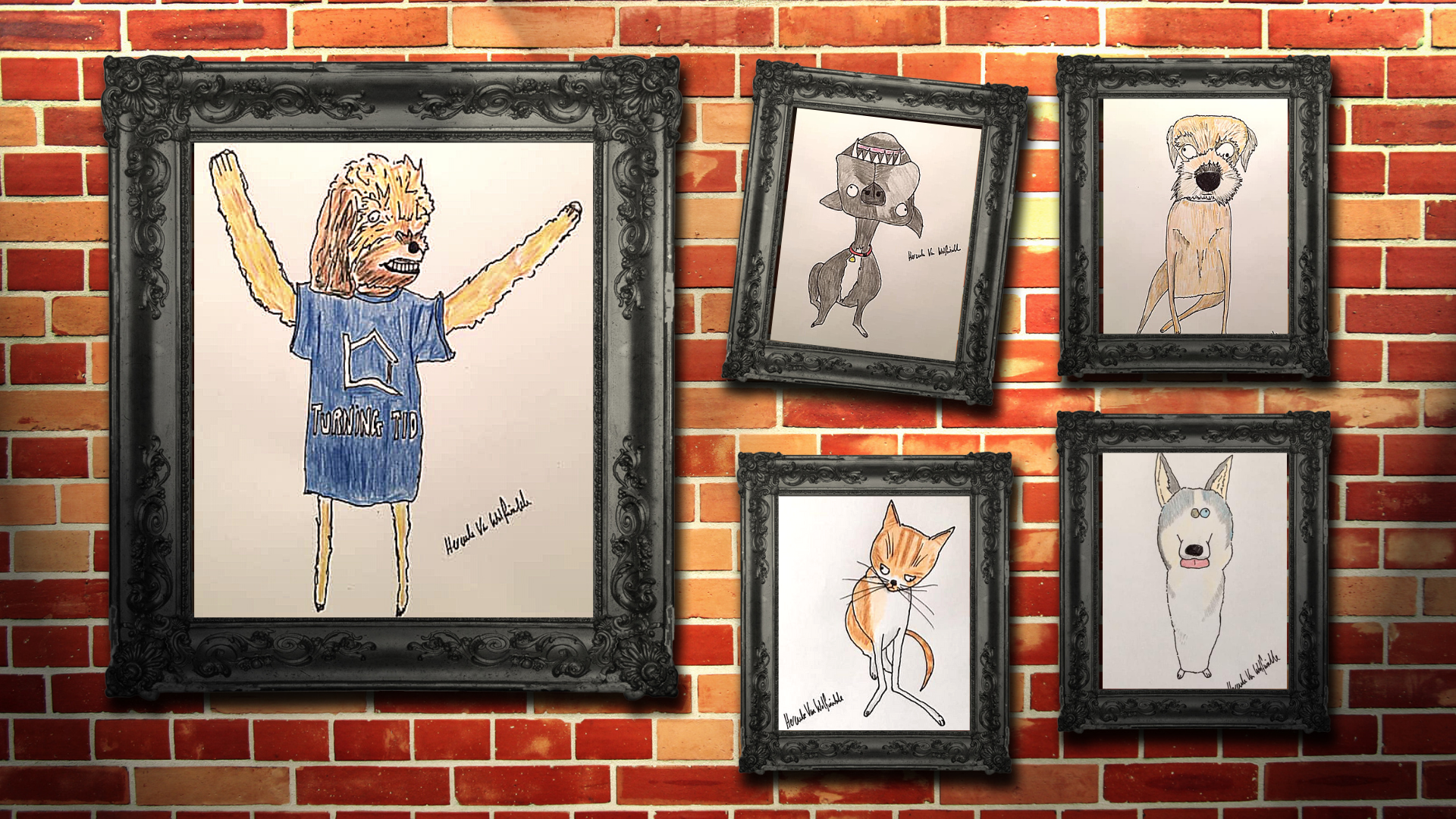 Hercule to draw non-stop until he reaches 100 portraits

Hercule is set to take on his next drawathon on Friday 6th May to raise money towards Turning Tides and StreetVet. Hercule (aka Phil Heckels of Worthing) will be drawing non-stop until he reaches 100 portraits.

Having previously completed his 24-hour drawathon in which he managed to draw 85 portraits without rest or sleep, Hercule hopes to finish the 100th picture sometime on Saturday night after starting the challenge at 8pm on Friday evening. Although the event has yet to begin, a whopping £6647 has already been raised. Over 400 pet photos have been submitted to be one of the 100 portraits by the artist’s fans from across the globe; each entry was accompanied by a donation to either Turning Tides or StreetVet. The lucky 100 will be chosen at random.

Launching via Facebook Live at 8pm on Friday 6th May, Hercule will be checking in throughout the drawathon so supporters can witness his portraits come to life, cheer him on as the sleep deprivation hits and continue to donate to the charities. Having rubbed shoulders with the stars, appearing on TV shows such as The Russell Howard Hour and Crufts, Hercule has hinted at some welcome appearances from some special guests.

The Facebook Lives will include chats with representatives from the two charities, including a tour of a Turning Tides hub service, offering an insight into the life-saving support provided to people experiencing homelessness and sleeping rough. Followers will also meet some of StreetVet’s outreach team as they return from a shift.

Ruth Poyner, Head of Fundraising and Communications at Turning Tides, commented: “We continue to be blown away by Hercule’s fundraising efforts, which have so far raised an unbelievable £120,000 towards Turning Tides. His latest fundraising venture could not have come at a more crucial time, as we are desperately in need of vital funds to protect the future of our Community Hubs – which provide the fundamental first step of people’s journey out of homelessness. Hercule’s endless creativity and one-of-a-kind witticisms have ensured his followers continue to be uniquely amused on a daily basis. Our gratitude is immeasurable, and we will be cheering him on from the side lines as he takes on this mammoth challenge.”

To donate to show your support as he tackles this herculean challenge, visit his JustGiving page

With the greatest pride and gratitude we are delighted to say that Hercule and all his wonderful supporters have now donated a staggeringly epic amount of £100k. We would like to thank Phil for his continued commitment to Turning Tides – we know how many evenings he has given up throughout this journey to keep up with all the drawing requests and to deliver his witticisms to bring a smile through some of the darkest days during the pandemic. We admire Phil’s limitless creative talent but also his passion to support the growing number of people who are finding themselves homeless. As a direct result of the monies raised – we can continue to help more people throughout West Sussex so that no person has to face homelessness alone.

WELL DONE AND THANK YOU PHIL – AND ALL YOUR WONDERFUL SUPPORTERS.

To donate and keep up to date with how much money has been raised: JustGiving Page

It’s likely you’ve by now already heard of the extraordinary story of Hecule Van Wolfwinkle – the artist behind the ‘rubbish’ pet portraits that have not only become a global internet sensation, but helped raised close to £80,000 for men and women experiencing homelessness in West Sussex.

Hercule (also known as Phil Heckles of Worthing), could never have believed that his drawings would raise over £78,000 in just over 6 months for our charity. What started as a thank you card to his parents, as an attempt to get his reluctant 6 year old away from computer games – turned into a virtual storm gaining coverage on the The Daily Mail, BBC, CNN, and even a personal letter of recognition from Boris Johnson who awarded him ‘The Daily Points of Light’ honour.

In a recent push for support – as Turning Tides braces for the effects of the aftermath of Covid – Phil pledged to embark on a 24 hour ‘drawathon’ attempting to stay awake and draw as many portraits as possible, inviting fans to witness the events unfold during a number of Facebook live broadcasts.

There were more than 4,000 requests submitted for drawathon portraits from as far afield as the USA, Australia, South Africa, Dubai and Korea. As Hercule felt the effects of sleep deprivation he was cheered on by his loyal supporters racking up 172,000 views on his Facebook live drawing sessions where he playfully revealed the methods behind his ‘ultra realistic’ style.

Fundraising Manager Lucy commented on the achievement; “Phil had initially set out to raise an additional £1,000 across the 24 hours, but this total was achieved within the first two hours of the event! His final total was well over £10,000 and we are yet again left speechless at what he has achieved. The drawathon was a real moment for our charity, seeing messages of support and generous donations pour in from around the world. Phil has made such a difference to those experiencing homelessness and remains one of the most humble men I’ve ever known, almost refusing to accept this is his own achievement. On behalf of Turning Tides thank you from the bottom of our hearts to everyone who has donated. The positive effects of this will continue for a long, long time to come.”

How Hercule came to be a sensation

Phil Heckels of Worthing (38), also known as Hercule Van Wolfwinkle, could never have believed that his “rubbish” drawings would raise over £20,000 in just over a month for our charity. What started as a thank you card to his parents, as an attempt to get his reluctant 6 year old away from computer games – turned into a virtual storm with hundreds of pet portrait requests flying in from around the globe.

If you sat down to watch breakfast news in October, you would undoubtedly have seen Phil – he has been on BBC National News, ITV’s This Morning and has been contacted by multiple news programmes from the United States – all in one day! Yet, Phil still regards his drawings as “rubbish” doodles and doesn’t honestly know what the fuss is about. However self-deprecating Phil may be – it is unmistakable that he has not only brought a smile to thousands of people at such a difficult time, he has also rallied people to make vital donations in support of men and women experiencing homelessness locally.

“Honestly, I just never would have believed these rubbish doodles of mine would cause such a sensation – it still doesn’t feel real. All I did was a drawing of my own dog for my parents, posted it on my Facebook page and then my friends requests started pouring in…. Before too long I found myself drawing pets every evening!”

“One of my mates wanted to pay me for the portrait I did but I honestly didn’t want any money because they are really not that great! I wanted any money to go to the charity I have supported for many years, Turning Tides. So I set up a JustGiving page and Facebook Page under the Pseudonym “Hercule Van Wolfwinkle’s Pet Portraits” and the rest, as they say is history! I have almost 13,000 people following me!”

Ruth Poyner Head of Fundraising and Communications commented: “We, are absolutely thrilled by the amazing talent, energy and enthusiasm Phil (aka Hercule Van Wolfwinkle) has poured into his Pet Portraits. Phil, and all his avid supporters have not only raised a staggering £18,000+ in such a short space of time, in support of our charity; he has also increased awareness of the rising numbers of homeless men and women in our community.

Phil has supported our charity for a number of years and shares our passionate belief that no one should be without a home. We are facing an unprecedented need for our services in West Sussex. We are incredibly concerned as we enter the winter months, how the ongoing pandemic will have an impact on the hundreds of men and women we already support but also those who will inevitably become homeless and need our support as the economic consequences of Covid take effect. The winter months are looming and this poses a great risk, particularly to the lives of people who are forced to sleep rough. It will be a real challenge this.”

Phil has a very ‘normal’ office job and is exceptionally critical of his drawings that take on a character and charm delighting the owners. Phil continues “I write fake reviews ridiculing my efforts supposedly from the owners. I think people believed them to be real at first”.

A flavour of his fake reviews will leave you in stitches:

Ruth continues: “Phil is exceptionally self-effacing but he has really brought a smile to so many at such a difficult time. Additionally, to know the donations from his much beloved pet portraits will also have a lasting positive impact on the most vulnerable people in our community is really very special.”

If you would like a real chuckle, whether you are an animal lover or not, these Pet Portraits and their fake reviews will leave you in hysterics. A real feel good factor for a cause that resonates with so many, especially at this time – as homelessness is set to escalate in the coming winter months.

See for yourself and request a portrait, but be aware Phil has over 3,500 requests! Visit his Facebook page: Hercule’s Pet Portraits or check out his fundraising page